I’ve already written a post on ignoring nonlinear geometry. This time I want to go way deeper into the subject. In the end, I want to create for you a simple Nonlinear Flow Chart that will help you to decide whether you need any sort of nonlinearities included in your analysis. Today I will focus on nonlinear geometry, as I think it is more tricky than material one 🙂

Do I need nonlinear geometry? 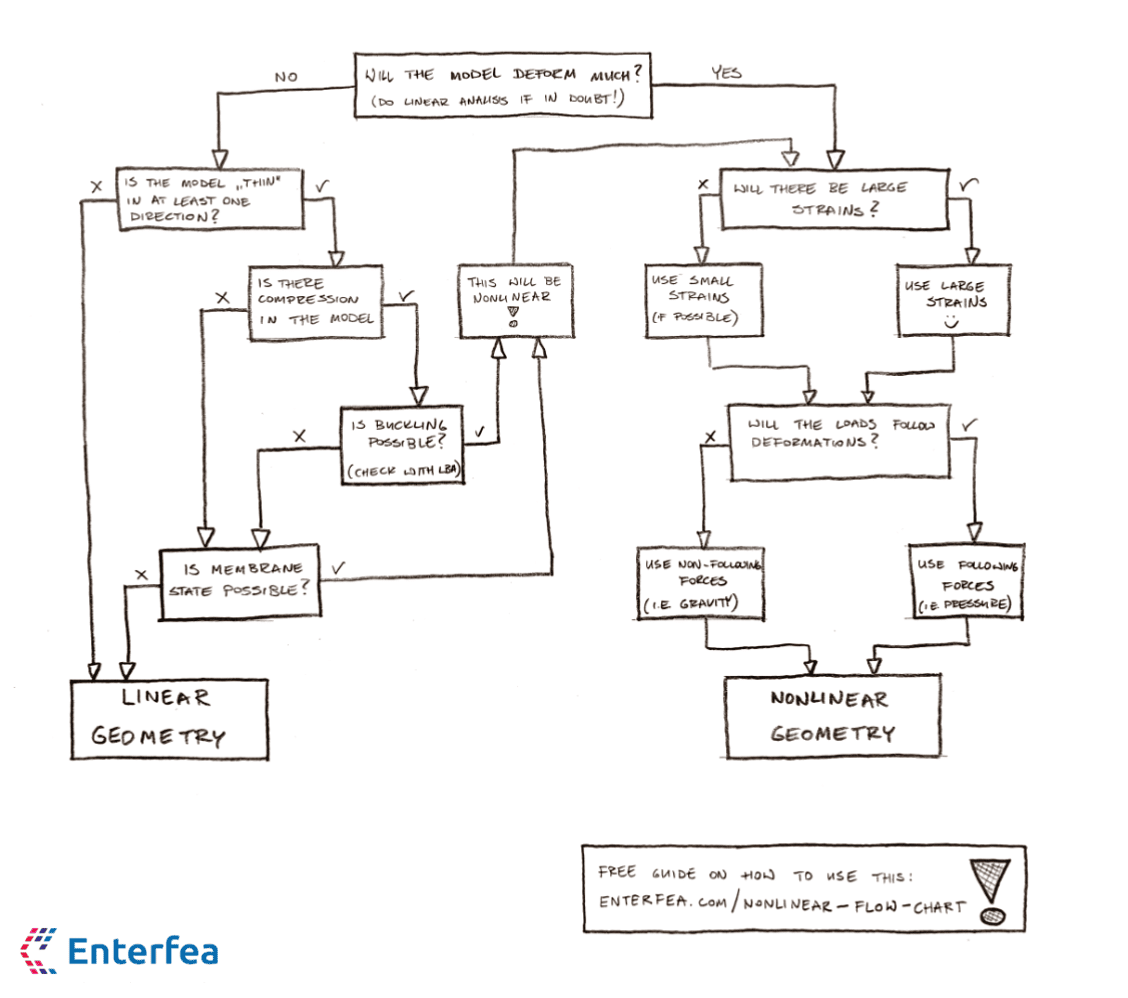 Whenever you start an analysis, and you are not certain if you need any nonlinearities start here! Firstly you need to answer a seemingly simple question:
Will the structure deform much? It seems so trivial, right? But the truth is such questions are always the hardest. I mean – how many mm of deflection will you count as “much”? I could write that this is relative to the problem and simply end here… but let’s tackle this a bit!

First of all how to know how the structure will deform?
In many cases, you will just know! After all only the first few analysis will be your “first analysis”. Later you will be able to partially rely on previous experiences. After some time you will have a “gut feeling” telling you if the deformations will be high / low / “tricky”.

Just don’t be too cocky!

It is better to consider nonlinear geometry that does nothing, that to ignore it when it is important!
If you could ignore geometrical nonlinearity but you won’t, you will basically get the same outcomes as from linear analysis.
So in the worst case scenario, you will waste some computing time.
This time won’t even be huge, as linear problems converge really nicely in nonlinear analysis : )

The structure deforms much!
Congratulations! You already know something! Basically, the above means, that you need to use the nonlinear geometry in your analysis.
This is however not all! The next question is:

Will the strains be large?
Think about it this way: if the model deforms, but single elements remain more or less of the same shape this is “small strain”. If the elements themselves deform this is a “large strain”. So even if you are not sure, after the analysis you can see that in the outcomes. Most analysis I encounter are small strains, but this may not be the rule in your industry.

Computing “large strains” usually takes more time… so if you don’t have to, don’t use it!
If you have models that will greatly deform locally (like metal forming, rubber seals fitting new geometry etc.) large strains are a good option.

As with everything – if you are unsure use it… in the worst case you will waste some computing time!

The structure deforms much, and you picked large/small strains!

There is only one choice left in this branch! And the last question here is:

Will the loads follow deformations of the structure?
This one is simple. You should know the question simply by understanding the nature of your problem. There is not a lot you can do to “verify” this assumption. It simply depends on the “type and behavior” of the load in real life. 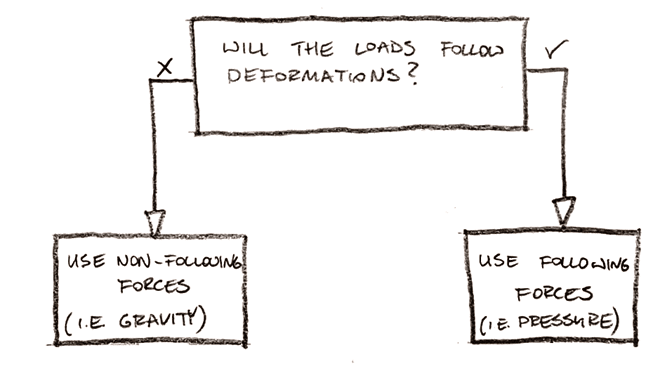 No worries I won’t let you alone with this! If you are unsure about your load think about it this way:

What causes the load?

Deformations are small!
This is a second possible answer to the first question… Yea, doing description for a flow chart is that tricky : )
If the deformations are small, you are not off the hook yet! The next question is “tricky”, as there is no really good way to ask it:

Is the model “thin” in at least one direction?
Normally one could refer to a structure that is “thick” in all directions as to solid. But this can be confused with solid elements (like HEX or TET). And you can model shell and even beams with solid elements. To avoid confusion think about it this way: “can something buckle”?

If you have a beam the cross section of it is at least 10 times smaller than the length (so it is “thin” in both in-plane directions). Shell is far thinner than it’s other directions (so it is also “thin”). Both those elements CAN buckle if under compression. It doesn’t even matter if you have compression in your model or not… it’s only for classification!

In contrast, a normal 6 sided dice is “thick”. Not a single direction of it is way thinner than the others. But if I would take a box (thin walls but “overall” shape is a cube) it has “thin” walls right?

This is a bit tricky to describe, but at least the answer is more or less intuitive!

Deformations are small, nothing is “thin”!
This is boring, so let’s be done with it. Congratulations – it seems you are loading a solid piece that won’t deform a lot and also won’t buckle or enter a “membrane” state. This means you can easily use linear geometry in your analysis!

Deformations are small, something is “thin”!
Much better! There is still hope something will go wrong! Firstly:

(if you don’t know what a strong axis is… read this!)

In other words, if there is compression or in-plane bending there is still hope for a nonlinear problem!

Deformations are small, something is “thin”, there is compression!

Nice! Now we are in the buckling zone! In general, it is wise to check if buckling (or lateral torsional buckling, and sometimes even buckling under shear) is possible.

This can be achieved by Linear Buckling Analysis (LBA, but in all honesty “B” is for bifurcation not buckling in that name). If the outcome satisfies you, then great… if it doesn’t then it’s even better, as the problem just got nonlinear! 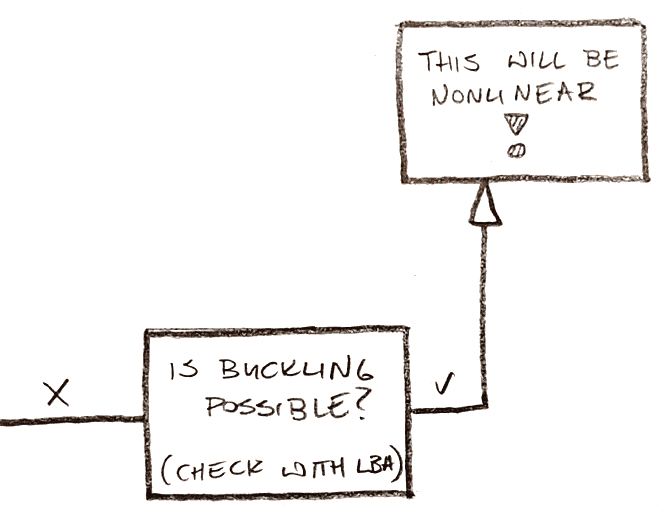 As always all is nice “in words” but when LBA outcomes are “acceptable”?

There is no answer!
I have met so many people that claimed that if the critical multiplier is higher than “X” then all is fine… This is only true if “X” is very high I’m afraid, and only for certain problems! Truth is that critical multiplier varies, and value unacceptable in one model, can be easily accepted in another… There is no “golden rule” here.

In a reasonably designed truss multiplier of 3 for the bracings is more or less fine. For a frame, the multiplier of around 10 may indicate you are fine (doesn’t have to and still buckling will reduce capacity BTW). In a shell I would never ignore nonlinear buckling analysis… well maybe around critical multiplier of 100 I would think about it.

In general, if you are not sure… go with nonlinear buckling analysis. You simply can’t be wrong this way! Also, don’t forget about imperfections in buckling cases!

Of course, if buckling is possible, large deformations will happen, so you should “consider” large strains and follower forces as well.

If you decided that buckling is possible, it’s just as if you would answer that deformations will be large in the flowchart… but with imperfections being more important!

Deformations are small, something is “thin”, there is no compression!
Don’t lose hope yet! There is still something that can be nonlinear.
Remember the story about my favorite sweater when I explained how geometrical nonlinearity works?

I used a string there to explain what a “membrane state” is. You see, when you deform something that is not rigid (“thin” in at least one direction), it can deform a lot. Then, instead of bending, you get tension in this element (more on this in my sweater post!). Professionally you can say that bending and tension are “coupled” in the model. 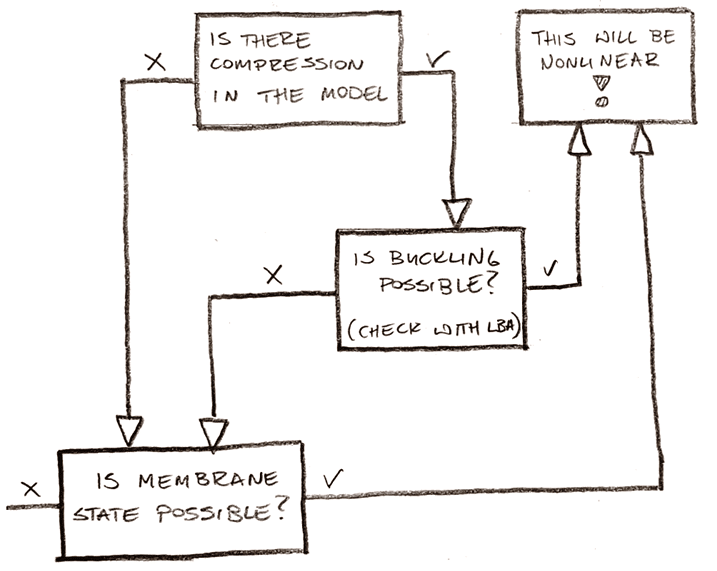 This means, that something can go into “membrane state”, and this is a geometrically nonlinear problem! This is also our last resort!

If you have a model where something is thin, but it is not loaded in such a way, that it can go into membrane state… you should do a linear analysis!

You’ve done it!
Congratulations… you have managed to read this all : )
In this part of the #NonlinearFlowChart you have learned how to assess if the nonlinear geometry is required. Next, we will talk about other parts of the chart! 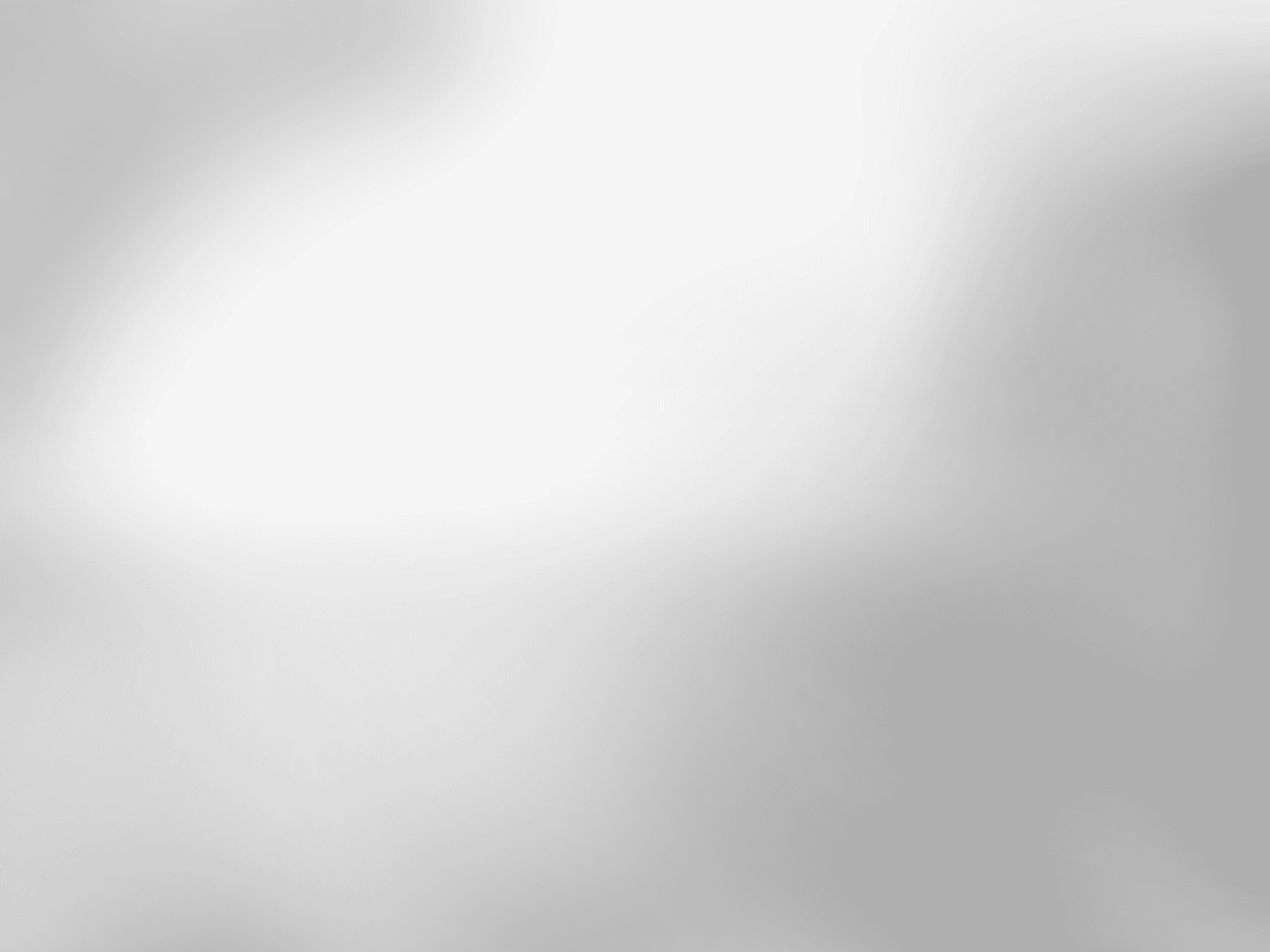